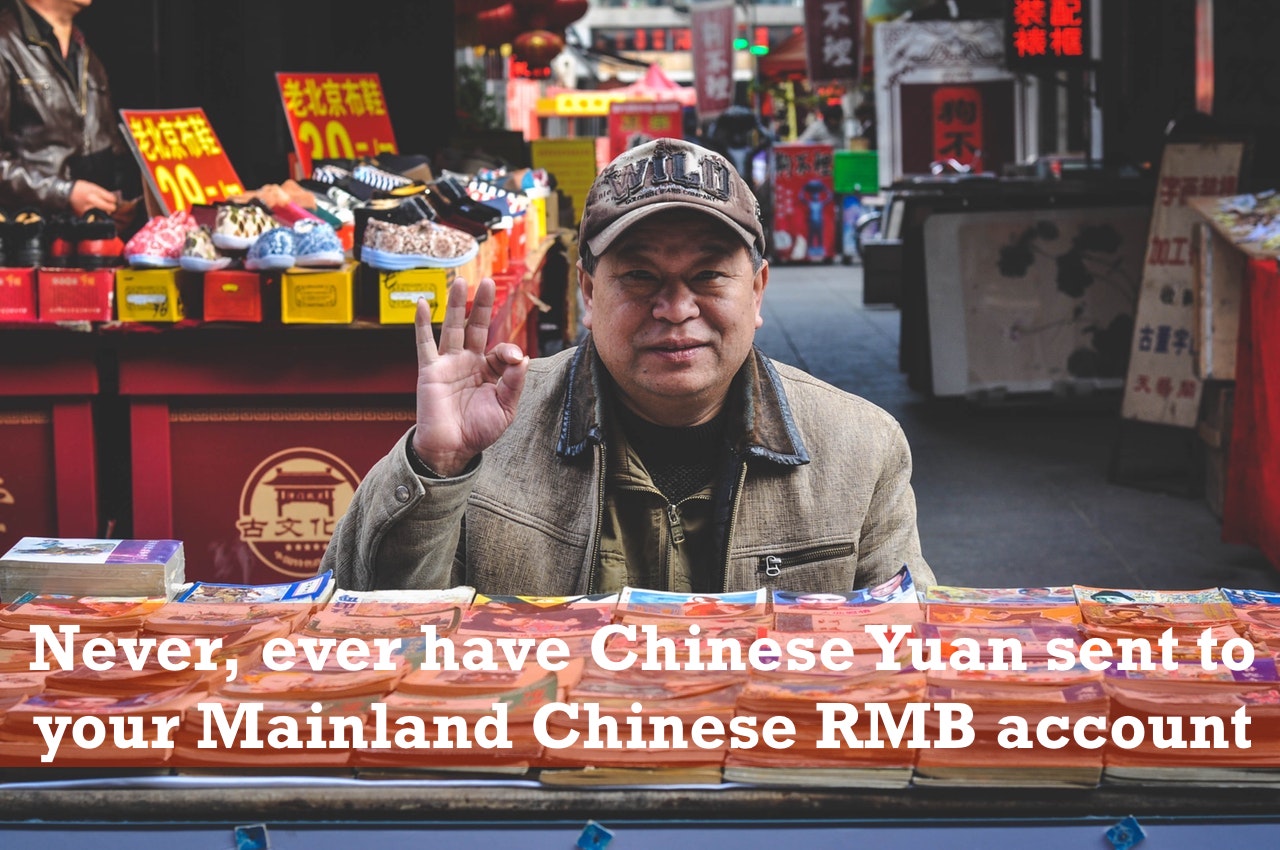 Never, ever have Renminbi (RMB) or Chinese Yuan (CNY) sent to your Mainland Chinese bank account. (Are RMB and CNY the same? The short answer is yes.) Just don’t. I learned this the hard way.

In around 2015, I had my sister send me a small amount of US dollars to Mainland Chinese bank account. She sent it through through her bank in Singapore through online banking through SWIFT. Her bank account was in Singapore dollars, but she choose US dollars from the drop down. I did take some time for the amount to be cleared. I remember waiting a couple of days, or was it a week or so. I can’t remember, but it wasn’t terribly so long. Well, anyway, I wasn’t able to withdraw it immediately. It was a bit disturbing at first to check my bank balance and see an RMB amount and a USD amount which I could seem to withdraw or convert into RMB from a regular ATM account. There were no options to convert this USD into RMB on their online banking system either.

After fiddling around with ATMs and online banking for a couple of days without result, I walked into my local Bank of China branch out of desperation. What the friendly manager-on-duty told me, as I strained to understand her with my not-so-perfect grasp of Chinese mandarin, was I had to withdraw from the US dollars credited to my Chinese personal bank account in RMB from one of their special ATM machines. Of course, I wasn’t able to withdraw the entire amount, so to this dayI actually have a one US cent credit in my Chinese bank account.

So, It seems that each Mainland Chinese personal bank account comes with an automatic dollar account. So the money was not automatically converted into RMB/CNY. You have to withdraw it at a local branch.

So yeah, a bit troublesome, but not so much now that I know what to do next time around.

Of course, I had to be ever curious. So this was not the end of the story.

Sometime in December 2017, my sister (another one), who was an expat in Qatar at the time, decided to send me again some money from into my Chinese Mainland Bank Account to buy her some hard-to-find stuff in China. What currency should she send it in?

Uhmm… Well, I remember my troubles when I ask my other sister to send me USD. Nah, I didn’t want a dose of that again. What would be the least troublesome? I decided since what I had was a local RMB account, the logical answer was to have me sent the money in RMB.

“Send it to me in RMB” I said with confidence. “The last time I was sent money from overseas it was in USD and it was troublesome.”

A couple clicks of her mouse. A dropdown with RMB selected and ‘blip’! Done. I was sent an okay sum of money. The amount? Let’s say it was way less than the international money laundering alert level of USD10,000.

Okay, it should show up on my Mainland Chinese bank account with no troubles.

SWIFT transfer, ah, four days or so? Or so I thought.

What happened to that darn money? I was of course getting a tad bit worried. After the third week, I just decided to get into the bottom of this. I went into my local Bank of China branch. This time, things weren’t simple as I expected. Not at all.

Visit number one: I went there and I was asked for the transaction number. Which I promptly gave. The teller, typed into her magic computer and “viola”!

Teller: Yes, I see that there was transfer.

Teller: It seems to be suspended. Let me make a call.

(At this point, the teller scrambles around asking her colleagues this and that and gets on the phone. She pulls out a sheet of paper from a nearby printer and a pen, and starts scribbling down notes.)

Teller: So yeah, the transfer has been suspended. But we’ll need to to as for some documents.

Me: Sure what documents?

(The teller tries to get an older looking colleague)

Older bank employee: Okay, so why don’t you give me, uhmmm…(she waved the pen like a magic wand and started scribbling)

WTF!?! yes, she did not say exactly what document. She just said a document. I was of course really distressed by this.

For a number of minutes, we haggled back and forth on what documents would be acceptable, and what aren’t. Can my visa be accepted? Can a certification from my office be proof I was employed? How do I prove the relationship between my sister and I? A birth certificate? No? Why not? My sister and I practically have the same middle name and last name!

It was very quickly apparent she was just making up the documents as she went along.

After haggling with her for some time, the bank teller later finally admitted that she actually didn’t know documents she had to ask for. All she was given were some “guidelines” from the Chinese government which said that this transaction should be investigated.

We ended up with me giving her my number and her promising to call once she finalized what documents she has to give the following day.

(Needless to say, she never called)

Teller: Sorry we didn’t call last Friday. Uhmm… let me make a call… (No one picks up.) The person-in-charge of this isn’t here, please come back. We’ll call you when we have settled the matter.

(Needless to say, she never called)

I was hoping this time, there would be a clear cut answer what documents I had to give. But then I was totally wrong. During this visit I had to haggle again what documents can I give.

During haggling we decided:

I dared to ask them what documents I would have to submit if I were not so lucky to work at a consulate right across the street so I can tell my friends just in case they also have RMB sent to them. They didn’t know.

I quickly rushed across the street to my office and typed out the certificates they needed.

That same day, I ran across the street and submitted the documents she asked for. And of course there were forms to fill out. Ah finally. The comfort of filling up forms. It definitely beat a bank teller making up requirements on the spot based on some nebulous guidelines. She also explained the situation a bit more while I was filling out the forms. More on this later. A bit of accessing her computer, typing here and there, scanning of passport and documents, consulting an older colleague, everything seemed to go fine… Then suddenly…

Teller: Oops. Wait. Your sister wrote your name on her transaction as  “Duke Villanueva”. However, your name in our system is “Duke Appleton Villanueva” (my middle name is not “Appleton” by the way, I’m just using it as an example/placeholder). We can’t process this.”

(WTF!!! Even writing on my keyboard right now I feel like jumping up and down and cursing.)

Me: So what should I do?

Me: How can she do that?

Teller: She has to figure it out. Come back in a few days. (She hands me back the forms) Bring those forms you just filled out.

I was so tempted to rip into little pieces the forms she just made me fill out.

At least this time she did not promise to call me.

She couldn’t figure it out, so she decided to wait it out. My sister was contacted by Bank of Qatar after a week or so, and she had the name amended.

I walk into the branch. “There is that pesky foreigner again.” I could almost hear the teller whisper. Her eyes rolled.

Me: So, can I withdraw the money now. Here are the forms I filled out the last time.

(The teller checks her computer, makes a call, consults a colleague…)

Teller: Yup, all is fine. Just sign here and here.

At this point, I’d like to say a single tear of joy dropped from my eye, but no, I was still upset. I am after all human.

Thus ended the saga of trying to get the RMB my sister deposited into my RMB account.

So what did I learn. Sometime during my visit number four the teller explained stuff a bit.

So yeap. That’s it. If someone is sending you money from overseas to your Chinese bank account, DO NOT have them send it in RMB. It will be flagged. And you will be put at the mercy of a bank teller or manager who will make up the required documents on the spot.